Too many poetic, dramatic things come to mind when trying to illustrate a place as unique and dreamlike as Italy’s Civita di Bagnoregio; to walk up its heavily reinforced bridge is to enter a portal into a place without a trace of modernity. Its isolation grants it the ability to remain in a frozen trance, a small enough place where you feel both awed by its medieval charm and utterly aware of your own mortality.

“The Crumbling City”, a dying town, the victim of mother nature? A city in the clouds, an island in the sky, a kingdom above? Locals say “Il paese che muore” (the dying city), but I think “Medieval Island” better suits the tucked away magnificence of Civita di Bagnoregio. How does one even begin to describe it? To start, there’s nothing grey about this rural, Italian retreat.

Precariously perched at the top of a massive hill in the Tiber River Valley, Civita lords over lesser peaks and rolling valleys in sweet defiance of the elements. The clay and stone sides of the once great city has been steadily chipped away at for centuries, yet it looks so proud and resilient that to call it “dying” or “crumbling” seems insulting. It’s here that the Middle Ages are perfectly preserved with no reminders of what century you are in, and the very real thought of its endangered state sparks intense appreciation and awe. The only thing between you and the rest of the world is a sea of hills.

Like many places in Italy, Civita has Etruscan roots and ancient Roman ties. It was an important, central city in the region until an earthquake caused intense damage in the 16th century and triggered a steady decline. Its government and population gradually moved downhill to Bagnoregio and it sat a ghost town until tourism brought new life in the late 2000s. The permanent population ranges up to the mid teens, but during the summer it skyrockets with vacationing Italians and visiting tourists drawn to its curiosity. The most steady group are the well fed stray cats that know how to charm the prosciutto right out of a visitor’s panino.

Today the long, winding donkey paths used to reach the top are gone and a steep footbridge is the only way to reach town. The medieval architecture is prominent with assorted pagan remains blended in, but the place is quintessentially Italian. Several small businesses cater to visiting crowds and restaurants offer delicious local fare in cozy stone rooms, but if you visit in the winter your options are limited. Since there aren’t enough customers to serve during dinner in the off season, the restaurants take turns staying open during the week. As expected, it’s incredible.

My visit was during this off season, and my travel partners and I rented a car to make the hour and half drive south from Perugia. The town was relatively lively during the day with tourists, but the stillness of the evening snuck up on us and suddenly everything became super spooky. We were probably the only souls sleeping in Civita (besides our Air BNB host) and we had the crumbling city all to ourselves. We jumped each time the church bells rang or a cat darted out from the shadows, but the pervasive calm of the stoic stone buildings soothed us with its magic.

To feel truly isolated is this. No humming of heaters, coughs in the street, idling vehicles. No sound or movement. Everything was still. This city rises out of the ground into the sky and was an incredible look at a time long gone with no distractions. Just you and the stones underfoot that centuries of people walked on before you. We circled our way through town several times, each time noticing new details and taking in the surroundings. The seasonal bonus of a visit during the winter meant an even more intimate experience.

Intact walls hang over brutal cliffs, peeking over the sides of the hill with windows looking out into the lush, fertile valleys. They’re all that’s left of the original structures they once belonged to, and I couldn’t help but wonder if the 16th century building I was staying in was next to topple over. 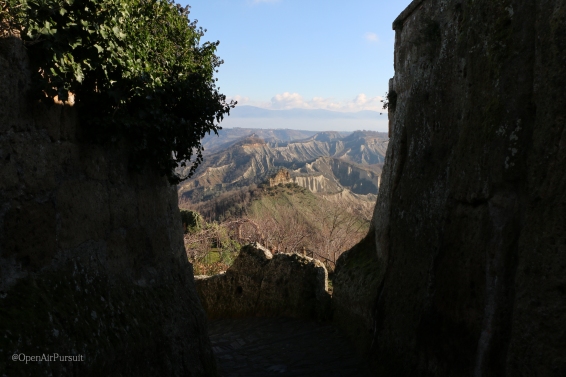 If you visit, I recommend staying the night and switching off all electronics. While Civita is small and can be appreciated as a day trip from Rome, the draw of reflection and quiet is satisfyingly therapeutic.  My AirBNB had a charming garden with fig and persimmon trees with the most incredible view of the valley, and the morning brought on a hike through the etruscan tunnels that wound down from the center and into the green countryside.

Thoughts of Civita will forever charm you with warmth , leaving you with a longing sigh of delight and hopes to see it again.

**Civita di Bagnoregio translated would mean Civita OF Bagnoregio…while this location is commonly called by that full moniker, the hilltop destination in this entry is Civita**

This site uses Akismet to reduce spam. Learn how your comment data is processed.